“What sparked my curiosity was that organisms have a plasticity, that they can respond to things and change how they behave.”

Nazif was fascinated by science as a kid, but as an act of teenage rebellion became more interested in the arts. 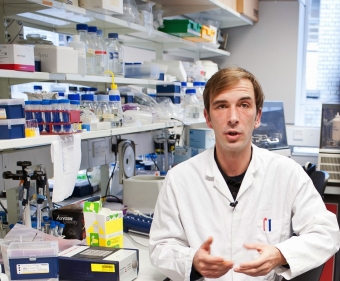 “I arrived in Australia out of the Bosnian war which meant I came into Year 12 without speaking that much English. So I took science again.”

He still planned to study photography at university.

“But my sister thought I would never get a job. She wanted me to do engineering, so I picked biology as a compromise.”

Nazif excelled at biology and when he was awarded a PhD scholarship, which he took up in Prof Ian Dawes’ lab.

“It turned out that I’m actually quite good at science! I also genuinely liked research.”

Nazif’s research focused on transcriptomic responses to oxidative stress in yeast. That is, how reactive oxygen species called free radicals change the messenger RNA expressed in a cell.

He was particularly fascinated by adaptation to these stresses, which can have subtle but profound effects on the functioning of an organism.

“What sparked my curiosity was that organisms have a plasticity, that they can respond to things and change how they behave.”

After a short post-doc in France, he joined the lab of renowned ageing researcher, Prof Linda Partridge, at University College London (UCL).

“I had no idea that Linda was famous when I first met her. She just seemed like a nice person who was working on a really interesting topic.”

Nazif now heads up his own lab at UCL, investigating how changes in fruit flies’ transcriptional machinery impact their lifespan.

“We are trying to understand processes that limit longevity, which we could then manipulate to extend lifespan and improve health.”

While he isn’t in the habit of planning his career, he sees a future for himself in research.

“There are waves up and down of your experiments not working, then you suddenly find something interesting. The things that make research a nightmare also make it thrilling.”