“If you can do multiple things, your chances of solving problems in the real world are much greater.”

Martin has spent his life experimenting. 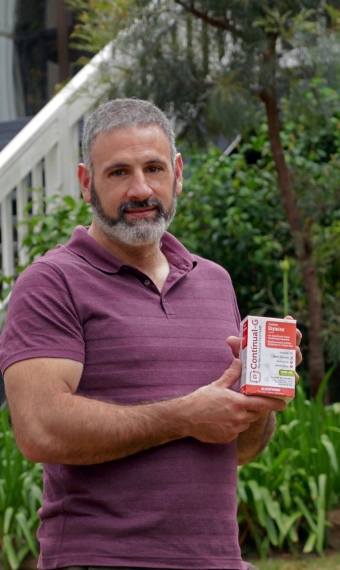 “I used to make little scientific projects and take them to school. The teachers would send me to show all the other kids.”

He got his Bachelor of Science in biological and chemical technologies, before spending a few years at a biotechnology company.

“Then I saw UNSW were looking for a fermentation scientist and I thought that’d be really interesting.”

“When that was finished, Wallace said, ‘Well, you’re working on several projects, why don’t we just make one of them a PhD?’”

He focused on developing bioprocesses to manufacture gamma glutamylcysteine (GGC), which has long been recognised as a potential dietary supplement and therapy.

GGC is a natural precursor to glutathione, which is often called the “master antioxidant” because it is produced by almost all aerobic cells.

“Every cell in your body can make glutathione, but the rates of production decrease as you age and in a lot of disease states.”

“Then I thought, ‘I could build this, it’s just two amino acids stuck together.’”

He combined his chemistry and biotechnology knowledge to synthesise the amino acids (glutamate and cysteine) then attach them by reversing the function of an enzyme that normally breaks their bond.

“As soon as I finished my PhD, Wallace and I started looking for parties interested in commercialising the technology.”

Their patent was quickly licenced to Biospecialties Australia, and Martin came on board as their R&D manager. In late 2019, they launched ContinualG, a line of dietary supplements containing GGC.

Martin continues to oversee processes and do vital R&D in their Newcastle facility. Many of his innovations target waste and efficiency.

“I'm interested in the greenest way of doing things.”

His advice to students is to do what they love, plus cultivate a wide range of skills.

“If you can do multiple things, your chances of solving problems in the real world are much greater.”