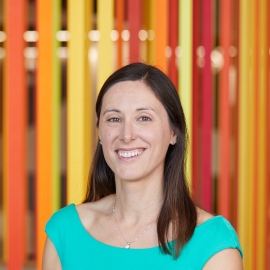 Kate is is Scientia Fellow (Level C) in the School of Biotechnology and Biomolecular Sciences (BABS).  She runs a research group interested in gene regulation, with a particular focus on understanding the communication between immune cells and fat cells within adipose tissue to uncover new therapeutic targets for obesity.  Kate completed her Bsc (Hons) (Advanced) at the University of Sydney in 2000.  She went to overseas to work as a Research Assistant at the University of Cambridge for a year before returning to the University of Sydney to complete her PhD under the supervision of Professor Merlin Crossley (2002-2006) in transcription factor biology.  Kate moved to the Children's Hospital at Westmead as a post doc under the mentorship of Professor Kathryn North in 2006, where she studied the effects of the human ACTN3 gene polymorphism on skeletal muscle performance and metabolism.  She continued her post doctoral training at the University of Cambridge (2008-2010) under the mentorship of Professor Roger Pedersen with the aid of an NHMRC CJ Martin Fellowship, researching pluripotency of embryonic stem cells and targeted differentiation of these cells towards skeletal muscle satellite cells.  She then returned to the University of Sydney to collaborate with Professor Kathryn North and to lead a program of research into the human ACTN3 gene polymorphism, with the aims of uncovering mechanisms behind changes to muscle function and metabolism in individuals homozygous for this polymorphism, and translating findings from model organisms to humans.  In 2014 Kate joined UNSW, working with Professor Merlin Crossley to study the transcriptional regulation of haematopoiesis and transcription factor mechanisms in addition to continuing an independent research program focussed on skeletal muscle metabolism.  She was awarded a UNSW Scientia Fellowship and became an independent group leader in 2018.  Kate mentors a number of PhD and Honours students.