Life on Venus? Traces of phosphine may be a sign of biological activity

Originally published in The Conversation on 15 September 2020 here.

The discovery that the atmosphere of Venus absorbs a precise frequency of microwave radiation has just turned planetary science on its head. An international team of scientists used radio telescopes in Hawaii and Chile to find signs that the clouds on Earth’s neighbouring planet contain tiny quantities of a molecule called phosphine.

Phosphine is a compound made from phosphorus and hydrogen, and on Earth its only natural source is tiny microbes that live in oxygen-free environments. It’s too early to say whether phosphine is also a sign of life on Venus – but no other explanation so far proposed seems to fit.

What makes an atmosphere?

The molecular makeup of a planet’s atmosphere normally depends on what its parent star is made of, the planet’s position in its star’s system, and the chemical and geological processes that take place given these conditions.

There is phosphine in the atmospheres of Jupiter and Saturn, for example, but there it’s not a sign of life. Scientists think it is formed in the deep atmosphere at high pressures and temperatures, then dredged into the upper atmosphere by a strong convection current.

Although phosphine quickly breaks down into phosphorus and hydrogen in the top clouds of these planets, enough lingers – 4.8 parts per million – to be observable. The phosphorus may be what gives clouds on Jupiter a reddish tinge.

Things are different on a rocky planet like Venus. The new research has found fainter traces of phosphine in the atmosphere, at 20 parts per billion.

Lightning, clouds, volcanoes and meteorite impacts might all produce some phosphine, but not enough to counter the rapid destruction of the compound in Venus’s highly oxidising atmosphere. The researchers considered all the chemical processes they could think of on Venus, but none could explain the concentration of phosphine. What’s left?

On Earth, phosphine is only produced by microbial life (and by various industrial processes) – and the concentration in our atmosphere is in the parts per trillion range. The much higher concentration on Venus cannot be ignored.

To determine whether the phosphine on Venus is really produced by life, chemists and geologists will be trying to identify other reactions and processes that could be alternative explanations.

Meanwhile, biologists will be trying to better understand the microbes that live in Venus-like conditions on Earth – high temperatures, high acidity, and high levels of carbon dioxide – and also ones that produce phosphine.

When Earth microbes produce phosphine, they do it via an “anaerobic” process, which means it happens where no oxygen is present. It has been observed in places such as activated sludge and sewage treatment plants, but the exact collection of microbes and processes is not well understood.

Biologists will also be trying to work out whether the microbes on Earth that produce phosphine could conceivably do it under the harsh Venusian conditions. If there is some biological process producing phosphine on Venus, it may be a form of “life” very different from what we know on Earth.

Searches for life beyond Earth have often skipped over Venus, because its surface temperature is around 500℃ and the atmospheric pressure is almost 100 times greater than on Earth. Conditions are more hospitable for life as we know it about 50 kilometres off the ground, although there are still vast clouds of sulfuric acid to deal with.

The researchers found the phosphine using spectroscopy, which is the study of how light interacts with molecules. When sunlight passes through Venus’s atmosphere, each molecule absorbs very specific colours of this light.

Using telescopes on Earth, we can take this light and split it into a massive rainbow. Each type of molecule present in Venus’ atmosphere produces a distinctive pattern of dark absorption lines in this rainbow, like an identifying barcode. 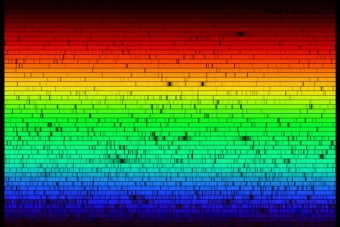 The full visible spectrum of sunlight, showing the dark ‘barcodes’ that indicate the presence of different atoms and molecules. N.A.Sharp, NOAO/NSO/Kitt Peak FTS/AURA/NSF

This barcode is not always strongest in visible light. Sometimes it can only be detected in the parts of the electromagnetic spectrum that are invisible to the human eye, such as UV rays, microwave, radio waves and infrared.

The barcode of carbon dioxide, for example, is most evident in the infrared region of the spectrum.

While phosphine on Jupiter was first detected in infrared, for Venus observations astronomers used radio telescopes: the Atacama Large Millimeter/submillimeter Array (ALMA) and James Clerk Maxwell Telescope (JCMT), which can detect the barcode of phosphine in millimetre wavelengths.

The discovery of phosphine on Venus relied not only on new observations, but also a more detailed knowledge of the compound’s barcode. Accurately predicting the barcode of phosphine across all relevant frequencies took the whole PhD of astrochemist Clara Sousa-Silva in the ExoMol group at University College London in 2015.

She used computational quantum chemistry – basically putting her molecule into a computer and solving the equations that describe its behaviour – to predict the strength of the barcode at different colours. She then tuned her model using available experimental data before making the 16.8 billion lines of phosphine’s barcode available to astronomers.

Sousa-Silva originally thought her data would be used to study Jupiter and Saturn, as well as weird stars and distant “hot Jupiter” exoplanets.

More recently, she led the detailed consideration of phosphine as a biosignature – a molecule whose presence implies life. This analysis demonstrated that, on small rocky exoplanets, phosphine should not be present in observable concentrations unless there was life there as well.

But she no doubt wouldn’t have dreamed of a phone call from an astronomer who has discovered phosphine on our nearest planetary neighbour. With phosphine on Venus, we won’t be limited to speculating and looking for molecular barcodes. We will be able to send probes there and hunt for the microbes directly. 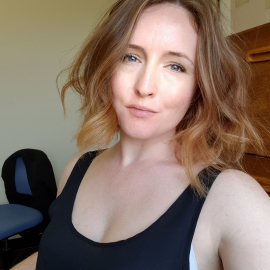