David leaves little doubt as to the importance of science. 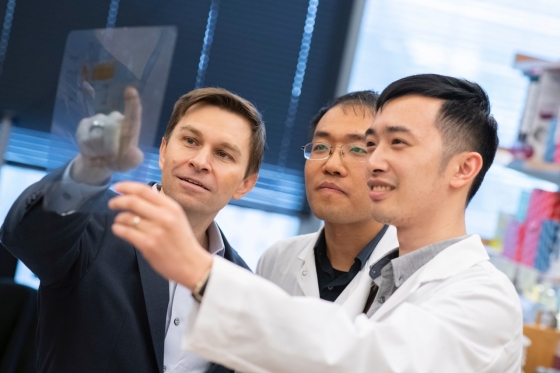 “Everything else is trivial.”

After graduating with a Bachelor of Science from the School of Biotechnology and Biomolecular Sciences, the last thing he wanted was to be stuck inside, so he moved north to try his hand at abalone and shrimp farming.

This first foray into entrepreneurship was less than successful. David soon found himself back in Sydney, working inside, as a lab technician with Prof Ian Dawes. To his surprise, he actually enjoyed it.

“When you're doing experiments as a student, you're told to mix this chemical with that one to get a particular result. But with research, no one knows what's going to happen.”

He began a PhD with Prof Dawes, searching for genes that encoded the glycine cleavage system (GCS) in yeast, an essential part of metabolism in many organisms.

While it was known that the GCS is made up of three enzymes and one carrier protein, the genetic basis of these components was a mystery.

In a time before high throughput sequencing, or even completion of the Human Genome Project, finding a gene was a little more difficult.

“It was time consuming, poisonous, radioactive. But it was so fascinating to have a gene in front of your eyes that no one else had seen before.”

He ultimately discovered and named three genes, GCV1, GCV2 and GCV3, that encode for three of the GCS components.

“My research was definitely driven by curiosity. That joy of being an explorer is the reason I still do it today.”

On top of being a professor at Harvard University and UNSW, David now has roles in nine companies, including four that he founded himself. They tackle many global challenges, but he remains best known for his work in ageing.

“Most people don’t think much about ageing. We’re trying desperately to stop people falling off a cliff, without asking why we’re at the cliff in the first place.”

He hopes that his bestselling first book, ‘Lifespan: Why We Age—and Why We Don't Have To’, will prompt people to start asking these questions.

David encourages students to aim as high as he does.

“Don’t settle for mediocrity. It might seem scary but if you’re passionate and you have a big dream, it’ll happen.”